From: May 2008 edition of EuroBiz magazine

Roving correspondent Ty Webb ventures deep into the rough to seek out the latest happenings in China's booming golf industry. This month he catches up with the organisers of Shanghai's annual Hairy Crab charity golf tournament.

To those not in the know, the annual Hairy Crab Invitational may appear to an outsider as three days of heavy partying and boozing amidst a golf backdrop. But on closer inspection it is immediately evident that this fun-loving group of swingers is indeed making an impact with its various charity activities that it plans to take to a higher level this year.

Named after the seasonal crustacean delicacy that lurks in the murky water of Jiangsu province's Yangcheng Lake, the Hairy Crab, now in its ninth year, is teeing off the 2008 tournament, May 15-18 at Shanghai Links, Nine Dragons Admiral and Tianma Country Club, respectively, under a banner reading "From Puxi with love".

Its boast of love is no joke, either. After raising an impressive US$256,000 (€160,000) for the Shanghai-based Fudan University Children's Hospital through individual and corporate donations in its first eight years, tournament organiser Stewart Beck has set the lofty goal of raising US$100,000 this year alone.

The 46-year-old Illinois native - a two-handicap and a walk-on to the University of Florida golf team for three consecutive years, where he played with or against such luminaries as Major winners Mark Calcavecchia and Bob Tway - was confident the fundraising goal could be reached with the growing number of corporate sponsors supporting the event. 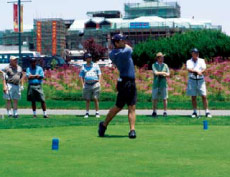 Beck, an old China hand who is now a television and documentary producer, said the tournament started its charity activities when Joe Tatelbaum, an original Crab, established a relationship with a Dr Wu at the Fudan Children's Hospital through his company JMI in year three.

Since then, the money raised from the tournaments has helped the hospital buy neo-natal intensive care equipment, incubators, ventilators and an ambulance, complete with the distinctive Hairy Crab logo adorning its exterior. In addition, a big chunk of the money has gone into training Chinese nurses overseas. Upon their return from places such as London or Hong Kong, the nurses cross-train local staff.

Now that Fudan Children's Hospital has moved from its original city location to what an incredible facility in the suburbs, Dr Wu has turned the Crabs onto new beneficiaries in hospitals in Jingdezhen, Jiangxi province, and Tai'an in Shandong.

Both hospitals are currently very basic, says Beck, adding that the charity wanted to start with small hospitals so that tournament donations could have a significant impact.

On the course, the level of golf is also very impressive with the Crab's unique scoring system. With a field of about 60 men (much like the membership at Augusta National, the tournament is a proud male domain), the players, who come from all over the world for the event, are grouped into categories depending on their handicap. The Crabs are scratch to 12 handicaps, the Shrimps 13-22 and the Clams 23-36, usually those who can't play all three days. There are also the Barnacles, the guys who don't play golf but just like to partake in the atmosphere.

Since 2000, the inaugural year when 24 players competed, the playing format has always been the same in rounds of best ball, scramble and alternate shot. Beck said the different formats worked well together as each put a different pressure on the different partners.

With a Crab, a low handicap, partnered with a Shrimp, a high handicap, the pressure on each player mounts as the tournament progresses. In a scramble format, typically it is the low-handicapper that is being relied on to hit more good shots. Under best ball, it is ideal when the high handicap comes through with pars or the odd birdie on their stroke holes. On the alternate shot format, the heat is on both players.

Beck said he was amazed that what started out as an experiment is now in its ninth year and growing in corporate support from such groups as Coca-Cola, Budweiser and the Long Bar (the Crab's unofficial clubhouse), among others.

And, much like professional golf, the Crab is one of the four Majors for the beer-league set along with the Jolly Elephant in Bangkok, the Jolly Beaver in Whistler, Canada and the Jolly Buffalo in Zhongshan, Guangdong.

The aptly named Sammy Mulligan and partner Grant Horsfield are the reigning Hairy Crab champs after scoring a decisive six point victory last year. Beck said the field for each year is usually full but new players could likely be accommodated