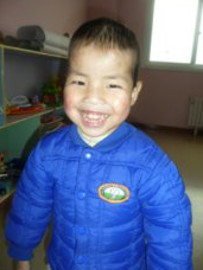 For the past year, preschooler Dang YiCai has shown tremendous improvement in his development.  He is blossoming into a healthy active boy.  One of his most memorable moments involved a field trip with his classmates to the local aquarium.  There, he watched in awe at these slippery little creatures move about in their blue world behind the observation glass.  Quite a fascinating sight!  He and the others excitedly wanted to recreate their newfound discovery in their classroom.  In no time, the classroom was strewn with crepe paper, cardboard, glue, and scissors.  The classroom buzzed with hurried fervor.  After cutting out a fish model, YiCai held it up for me to see. "Teacher, see fish!" said YiCai.  "What do the fish look like in the aquarium?" I asked.  "Red," YiCai promptly responded. "Yes, in the fish aquarium, there are red and yellow fish. They are very beautiful. Do you want to paste colorful scales to your fish so it can become beautiful, too?" I asked.  After some time, YiCai transformed his paper cut out into a vibrant red fish, scales and all.  He held up his fish and wiggled it, imitating the moving fish he saw at the aquarium.  Pleased with his work, he then began chanting the song, "Three Fish," that he had learned in school.  In no time, it didn't take long for the others to join in while bobbing their creations in the air.  The once simple classroom was now full of laughter and an ocean of fish.