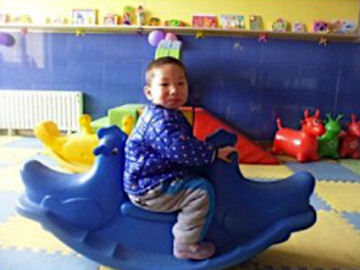 Young Dang XiaKe enjoys playing outdoors with his peers.  After slipping his hand into one of his playmate's hands, together, they headed outside for their next big adventure.  "Oh, XiaKe!" I exclaimed, "Did you spot a dog?"  He paused in thought, scrunching up his face.  "Can you say dog, XiaKe?" I inquired.  "D-d-d-d..og," he mumbled.  "Great!" I responded, "Say it again, XiaKe."  Bursting into a smile, XiaKe boldly yelled out, "DOG!"  His inquisitive mind also extends out to other school activities.  One day, his class conducted a science experiment.  XiaKe, with a desire to learn, participated in the exercise.  The teachers created two different piles. One pile was full of leaves. The other pile was full of feathers.  I then instructed XiaKe to stop and feel each pile.  XiaKe ran straight for the leaves, having remembered the fun he had playing with them earlier that day.  Scooping up the pile---whooooosh!!!----went the leaves into the air.  He happily watched them cascade down around his feet.  Looking up, he saw his playmates at the other pile blowing feathers into the air with their mouths.  "I want to do that, too!" XiaKe said to himself.  He tried to blow the leaf the same way.  Realizing how difficult it was to do so, he left the pile and joined his peers. He was pleased to see the feathers blowing easily off his hand.  "Which one is harder to blow up in the air?" I asked.  "The leaves because they are heavier!" said XiaKe.  With a knowing smile, he continued to watch the feathers dance in the air.