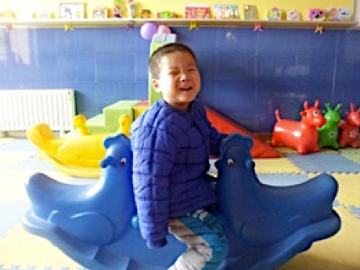 Early on, young Dang XiaZhou struggled with developmental issues.  For the past three months, however, he has shown steady improvement in his cognitive and physical abilities. He now engages with his peers more often than before, and he better expresses his feelings towards his teachers. For instance, while participating in an origami activity, XiaZhou was determined to master the art of origami.  He watched with great intensity as I demonstrated how to properly fold the paper.  Once it was his turn, he could not contain himself and immediately set to work.  With his nimble fingers, XiaZhou slowly and carefully transformed his piece of paper into a shape, a pair of horns.  He lifted his new creation up for me to see.  "XiaZhou," I asked, "the paper is folded in half, right?"  Smiling sheepishly, XiaZhou replied, "Yes."  I continued, "After folding, can you tell me how your paper has changed?"  Unsure about how to respond, XiaZhou lowered his head and fiddled with his horns as he thought it over.  Moments later, he lifted his creation again into the air and said aloud, "Teacher, my paper becomes small!"  Triumphant, he noticed another child struggling with the activity.  He set his horns down and went over to him.  He patiently demonstrated how to fold the paper.  It was clear on XiaZhou's face that helping others gave him a great sense of pride.  Soon after, he went back to working on other origami creations, folding and creating as many shapes that he could remember learning about!