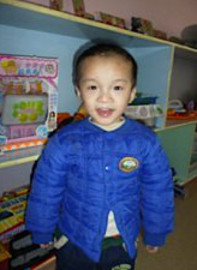 At the Luoyang Preschool, Dang YuQun is known for being a cheerful little boy.  He is always willing to participate in school activities with great enthusiasm.  On one particular cold day, we decided to teach the children about snow.  YuQun sat and listened as we gave safety instructions before heading out.  YuQun could not contain himself and talked excitedly with the others about the outing.  Stepping outside, YuQun immediately felt the cold winter air brush against his cheeks.  "Are you cold?" I asked.  YuQun happily shook his head no.  Suddenly, YuQun's little world became a storybook-like winter wonderland.  As he slowly stepped onto the snow, he could hear the crunch crunch of the snow beneath his feet.  His wide eyes watched the snowflakes fall around him.  "How does the snow feel in your hand, cold?" I inquired.  YuQun quietly nodded his head without taking his eyes off of the strange white powder.  Soon after, the children engaged in a fun snowball fight, and YuQun watched on the side with amazement.  He didn't know what to think.  In no time, a snowball flew in his direction.  YuQun was so engrossed in watching the snowball fight that he didn't even notice!  He and the children continued to play until it was time to head back.  As he returned to the warm confines of the school, YuQun peered over his shoulder, taking one last look at the silver-coated wonderland, before heading inside.